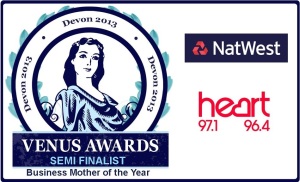 Launched in Dorset in 2009, the Venus Awards aim to recognise as many businesswomen as possible.

In January 2013 nominations started for the Devon NatWest Venus awards.  Gravitas Recruitment (SW) Ltd were delighted when company Director Alana Carroll  was nominated for The Business Mother award. We were even more excited when Alana had been selected for the semi finals!

The semi-finalists will now need to get the public voting to make the final three.  We would be so proud if we could help Alana to the final.

We would be really grateful if you could spare a moment to visit Devon – Public Vote – Venus Awards and click the ‘Vote Now’ tab below Alana’s photo.

We would also like to thank everyone for their continued support, it has been such an amazing experience so far.

Works for Gravitas Recruitment SW, specialising in Accountancy, Finance and Office Support roles in the South West.
View all posts by tpearce2012 →
This entry was posted in Uncategorized and tagged businessmother, Venusawards, womensawards. Bookmark the permalink.